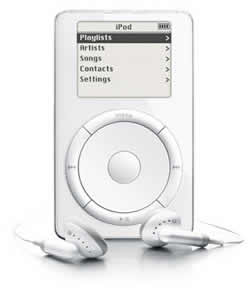 There are many reasons why Apple's doing so well. Power, usability, ergonomics, fashion.

But I believe one of the biggest reasons for Apple's recent success in computers has simply been the iPod.

The iPod – and later the iPhone and iPad – made millions of people "Apple people". People who hadn't previously considered themselves as Apple buyers.

Not only did they have a positive experience of Apple through the iPod, but for the first time, they considered themselves to be Apple buyers.

When it came time to buy a new PC, instead of just looking at Windows options as they'd done previously, many of them widened their horizons to consider a Mac. Previously, a Mac just wouldn't have figured in the decision – it'd have been ruled out subconsciously.

But once our self image includes an Apple buying element it becomes much easier for us to consider a higher priced part of the range.

We no longer have to make that psychological leap to seeing ourselves as an Apple buyer. We're already there.

The same thing happens with many potential clients.

If they've not hired consultants, coaches or whatever it is you do before, there can be a huge, inbuilt resistance to doing so.

They just don't see themselves as someone who hires a coach or a consultant. They barely consider it.

But if you can construct a simple "no brainer" offer. Your version of the iPod: a brilliant product with a low price tag. You can shift their perception.

You can get them to see themselves as a person who hires consulting or coaching. And so someone for whom buying a large project is just a step up from what they've done previously, not a whole different thing.

Someone who's bought just 1 day of consulting is 5 times more likely to buy a big engagement than someone who's never bought consulting before. The same goes for almost every conceivable service.

So what can you construct that's a low-cost, no brainer offer that will get your potential clients to see themselves as a buyer of your type of services.

View Comments (0) ...
Previous: Project 10K. Look Behind The Scenes At How I’m Growing My Business.
Next: What Executives Really Care About When Making Decisions
Navigation
48 Shares
Tweet28
Share4
Share16