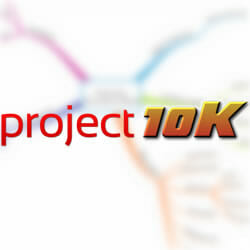 I‘ve had lots of people ask about progress. So did I hit 10,000 subscribers?

Nope. Not close. I'm regularly getting about 200 or so new subscribers every month. But not nearly enough to reach my 10,000 target.

So a miserable failure? Not really: here's why.

Firstly, I've actually removed a bunch of subscribers from my list. As I said in the original post, I only want engaged subscribers. People who are actually opening, reading and most importantly acting on my emails.

There's no benefit for you or your subscribers if they're not doing anything with your emails.

So I implemented some automation in my email system to remove people who weren't actively engaging. Turns out there were rather a lot of them. Over the year I've removed 2,743 folks, way more than I'd originally thought. If I'd just been going for numbers I'd have kept them and have got much closer to my target.

Secondly, I had to change priorities after a few months.

As I wrote in my earlier Project 10K posts on Getting More Website Visitors and Increasing Website Conversions I investigated lots of different ways of getting more subscribers and implemented some significant changes.

Some worked really well. I'm now a regular guest blogger for sites like Salesforce.com and Allbusiness.com and they're bringing me a small but regular flow of new subscribers. I tested out different types of optin forms, boxes and using video and have increased conversion rates significantly as a result.

The method that worked the best early on was joint webinars. You know the ones: I do a webinar for a partner who already has a bunch of subscribers who match my target audience. And they do one in return for my audience. Usually we promote a product at the end of the webinar which means we get new subscribers and a nice little income boost.

I've found that depending on the topic and the partner I can get 200-400 new subscribers every time I run a webinar for a partner. As you can imagine, do one or more of those a month and you're well on your way to 10,000 subscribers.

Lots of new subscribers and a cash boost to boot. What could possibly go wrong with that?

Unfortunately, there's a downside to doing lots of webinars as I discovered.

What I found was that after a couple of months of doing them I started getting negative feedback from the most important people in any business: my paying clients.

Not that they didn't like the webinars. I always carefully selected high quality presenters with something new and valuable to say.

The problem was that the webinars with partners were crowding my own messages out. As one of my clients said, “it feels like we're losing your voice. And you're the reason we signed up”.

Now there will always be people who don't like change. But when three of your paying clients give you very similar feedback in the space of a week you have to pay attention.

Now some people seem to manage this “Oprah” style well. They introduce a lot of new guests to their audiences and that's how they deliver value. Or they're so prolific that their voice isn't drowned out by frequent webinar invites, events and follow-ups.

But it doesn't work for me. I'm guessing that since people signed up for my particular spin on things rather than generic business advice, they prefer to hear mostly my voice.

So I radically cut back on the joint webinars I was doing. Instead of one or more a month, I switched to one every two or three months.

Business is all about decisions. I decided to focus on what was best for my clients and subscribers and my business rather than on hitting a target just for the sake of hitting it.

It might be. Not just through joint webinars, of course.

One of the areas I'm going to focus on is paid traffic. I mentioned it as an option in my initial Project 10K analysis and I've had some success with Google Adwords in the past but I just didn't find the time to get round to it last year.

But I'm not going to set a strict goal. I'm going to put the systems in place to to get more subscribers ticking in. But ultimately, my sales and the satisfaction of my clients take precedence over new subscribers.

By the way, if you want to find out how to use Google Adwords to grow your business you might like to join me on a webinar with the author of Simply Adwords, Mike Seddon, as we review the Adwords strategies that are working right now to bring you more subscribers and clients.

The webinar's on Thursday and you can register here: