Did you listen to my recent Authority Marketing Podcast interview with Drayton Bird? Hasn't he led an amazing life?

The interview reminded me of something I've long felt but never spoken about before. Something I describe as one of Marketing's biggest “half truths”.

Have you ever heard anyone say “your clients aren't interested in you – only what you can do for them”? Or “they don't care what you do – only the result they'll get”? Or the old classic “clients are tuned into WIIFM – what's in it for me”?

But it's also only half the story.

Here's the thing: weren't you fascinated by Drayton's anecdotes about his experiences, for example? And what are the most popular programmes on TV? The soap operas or character-based dramas like House or CSI.

We humans are fascinated by interesting characters. We want to know why House is the way he is – not just watch him cure the patient. We want to see the interplay between Grissom and Sara – not just the solution to the crime.

And vitally important for professionals – those stories lend credibility to our expertise. We hear Drayton's stories of studying human nature in his parents' pub. Of researching direct marketing more than anyone else. Of learning from the greats. And of making mistake after mistake until he got it right.

So although clients initially focus on what's in it for them – what results you'll deliver for them. They're also interested in your story. What is it in your backstory that makes you credible to deliver those results.

And that means that as a consultant, a coach or other advisor, you need an interesting and credibility-bestowing backstory.

I don't mean you make one up. But you look at your story and pick out the elements that make you credible in what you do.

Did you obsessively research your subject, for example? Or have you, like Drayton, “made every mistake in the book and then some” – you've got the experience and scars that mean you can steer your clients away from the problems you hit.

Perhaps you're the champion of the little guy (or big guy) like them. Or maybe you've been the guy behind the scenes pulling the strings making others like them successful.

Or maybe it's a combination of those things.

In the next post I'll run through some of the most effective “stories” you can have.

But for now, just think about your own story and what elements of it give you the most credibility in what you do. 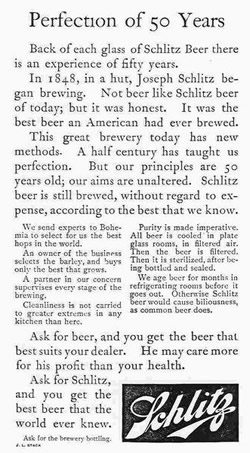 PS – it's not just people that people are interested in the backstory of. One of the most successful print advertisements of all time was the legendary Claude Hopkins' ad for Schlitz Beer shown here.

Did the ad focus on the refreshing taste, or how the beer would make you feel? Was it all about the result?

Nope. it talked about the 50 years of brewing experience. It described the care they took selecting the hops from Bohemia. It detailed the supervision of the process, the cleanliness, the purity, the filtration and the storage.

In short, it gave the backstory of the beer. It gave credibility to the claim that it was the best beer in the world.

And the impact for Schlitz? It went from fifth in the market to first in a few months and stayed there for years.

That's the power of a good backstory. One that goes beyond just WIIFM.