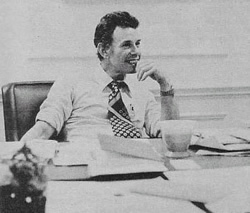 As the TV show Mad Men demonstrates, the world of advertising in the 60s was a pretty interesting place to be. And one of the most interesting guys in the field was Eugene Schwartz.

He was one of the highest paid copywriters in the business, and billed himself as the hardest working.

Decades before anyone else was getting into it, Schwartz was using techniques learned from Zen Masters to enhance his output. He used a method uncannily similar to the recently published Pomodoro Technique for productivity. And his method for fueling his creativity matches up to techniques taught today.

He used those techniques to get very rich working only 3 hours a day, 5 days a week, and spending the rest of his time collecting art (and giving much of it away to museums).

And in his book Breakthrough Advertising, published in 1967 (and which sold for up to $900 until it was recently republished) he wrote some deeply profound words about marketing.

Here's one quote I keep coming back to:

Let’s get to the heart of the matter. The power, the force, the overwhelming urge to own that makes advertising work, comes from the market itself, and not from the copy.

Copy cannot create desire for a product. It can only take the hopes, dreams, fears and desires that already exists in the hearts of millions of people, and focus those already existing desires onto a particular product.

Schwartz was talking about advertising, but what he says applies to all marketing.

And it explains why most of us find marketing and selling so painful.

Most of us imagine that our job in marketing is to persuade. To convince a potential client that they want what we've got. To create a desire for our services.

And we feel bad about that because it feels manipulative. We're trying to push them from where they are to where we are.

But Schwartz says that doesn't work. We can't create desire. Instead we need to channel the desires they already have.

Instead of pushing them from where they are to where we are, we go to where they already are. We show them how what we've got satisfies that desire.

We don't push. We uncover.

And, of course, if what we've got doesn't satisfy their desire, we move on. Because there's no point trying to persuade them that actually they should want what we've got. We can only channel what they aready want.

And it turns out they're one and the same.