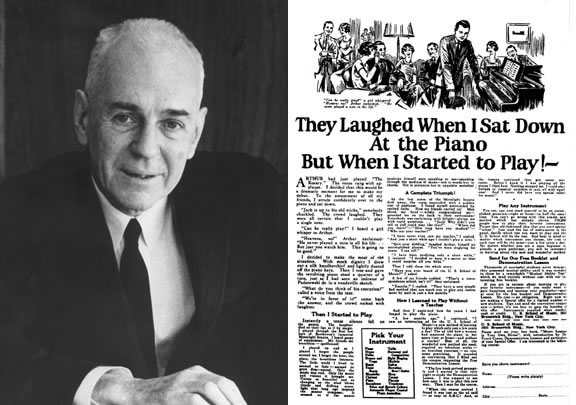 It was John Caples who created the terrifyingly beautiful guidance for marketers:

“First you need to enter the conversation going on in your prospect's mind”.

That's him in the picture above by the way, along with one of his most famous advertising pieces – written when he was just a rookie at Ruthrauff and Ryan in 1925.

First you need to enter the conversation going on in your prospect's mind. It's one of those maxims that gets more profound the more you think about it.

Have a think for a few seconds yourself – what does it mean for you?

In its original context of advertising it told copywriters that if they wanted to get the attention of their prospects they couldn't force their message on them. They had to start by keying in to things the prospect was already thinking about.

Things they were worried about. Or dreamt of. Or were excited about. Or just interested in.

That's why the most effective headlines for ads (or subject lines for emails and blog posts) focus on the benefits the prospect will receive, or on something in the news right now, or work by eliciting that ever present human emotion: curiosity.

By starting where your prospect already is you can gently move them to where you'd like them to be.

It's marketing judo rather than a full frontal attack.

And it works. Really well.

But the “conversation already going on…” strategy works in many more situations than just advertising.

Having an initial sales meeting with a potential client. You need to start from where they are. Do they trust you or are they wary? If so you'll need to address that before you move on.

Using testimonials on your website? Don't just use the standard “Ian's great, we loved working with him” type. Think through what remaining concerns about working with you might someone have at the time when they check out your testimonials. Then make sure the testimonials address those concerns. (For a great set of questions to ask to do that, see this article by Sean D'Souza).

Asking for a referral? Think what's going on in the mind of the person you'll be asking. What will they be worried about? What might they see ask the risk of referring you?

At almost any time when you need to be persuasive, always start from where your potential client already is. Enter the conversation going on in their mind.