A lot of focus gets put in Email Marketing on subject lines.

After all, if no one opens your email, no one is going to take action or buy.

But after opening it, if they then don't read it or they scan it and just close it without properly reading; it's the same end result. No action and no sales.

And frankly, making your emails readable is something even marketing experts screw up regularly as we'll see in a few moments.

But let's open with a critical statistic. Take a look at this chart from Litmus on which devices are used to open emails.

It shows that back in November 2013, opens on mobile devices (as opposed to desktop email software or webmail) passed 50%. In fact the number one email client is the Apple iPhone at 26%, followed by Outlook at 14%, with Android and Apple iPad both at 12%.

So in other words by far the most likely device your email will be opened on is some form of mobile device.

Which means that if you want your emails to get read today, they must be easily readable on mobile devices.

If you want your emails to get read today, they must be easily readable on mobile devices.

Unfortunately, even many marketing experts who should know better send emails that “break” mobile clients.

Here's an example. I've blurred out the face and logo so we focus on the email, not the individual ;) 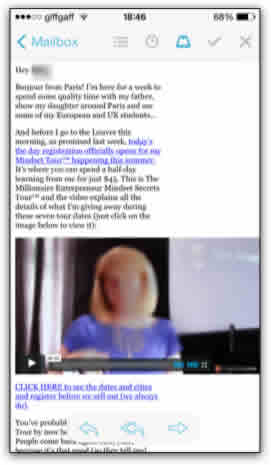 The use of an image of a video is a good idea. My testing has shown I get more clicks through to a video if I show a picture of it rather than just a bare link.

But because the image of the video is too big for my iPhone's screen, the mail client has shrunk the whole email to fit the image in.

And that means the text has shrunk so much it's become unreadable.

What happens if we can't easily read an email on our phone?

We close it and move on to the next one.

We might make a mental note to look at it when we get back to our desktop. But usually we're so overloaded with email that we never do. The chance has gone.

To make matter worse, if our email systems are synced across platforms with something like IMAP, the email gets marked as read on our desktop system too. So we don't even realise we haven't read it.

Am I being too picky about small text?

I don't think so. Have you ever tried zooming in on an email, then scrolling it left and right to read?

It's infuriating.  And if you're using one hand like most of us do when reading email on a mobile, it's pretty close to impossible.

And here's something important to bear in mind:

Your most affluent, best clients are most likely to be older. And that means their eyesight is going to be worse.

I simply can't read emails in small fonts. Lots of people in their 40s and over are in the same position. Older = more likely to be in a senior role in business. Exactly the people you do want opening your emails. So you don't want to lose them because you've compressed the text due to big images.

Some email marketing systems like GetResponse and Mailchimp have tools that allow you to specify that the image should be full width on a mobile device. They create the necessary styling that grows or shrinks the images to size and preserves the size of the text.

But many email systems don't.

If you're going to be using images in your emails, figure out how to make them “responsive” on your system, or keep them to a maximum of about 300 pixels wide. That way they'll display fine on an iPhone screen.

Here's a problem you get frequently on desktops emails too, but it's so much worse on mobiles: 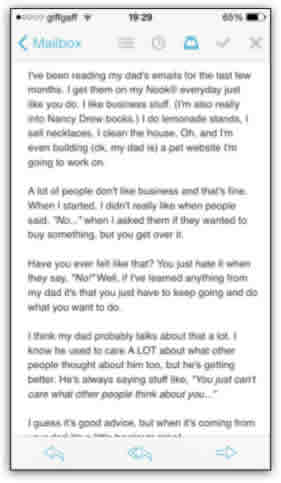 Does this look like the sort of email you'd want to read?

It's just huge block of text. it looks like it would make your brain hurt just to read one page of it. And it goes on for many pages more.

If you want people to read your emails on either desktop on mobile they've got to look easy to read.

So use white space: short sentences and paragraphs.

Break things up. Some longer sections, some shorter ones.

Add a bit of bolding, italics or underline.

Even in this relatively long article I've tried to break up the formatting of the text to make it feel easier. You need to do the same with your emails.

When your readers open your emails, the first thing on their mind is “what's in it for me?”.

The vast majority of the time they won't be opening your email ready to buy something from you. They're looking to see if your email will give them something useful.

They may have been enticed by your subject line, but if they don't know you well already then they'll still be skeptical. So they need to see something that immediately tells them they'll get value from your email.

What they don't want to see is an email that looks like it might have been sent by Amazon or Groupon that's pitching something at them. 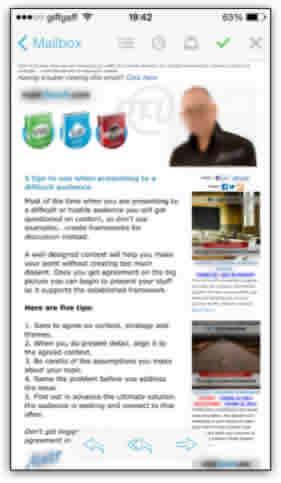 Take a look at this email.

It's actually got some very useful content about presenting to tough audiences.

But at first glance, because of the big pictures of what look like products for sale, it feels like the email is going to be one big sales pitch.

At best, it means I'm going to read the email with my “shields up”, assuming anything in there has been designed to make me buy.

As it happens, if you click on those images you get taken to the guy's home page rather than a sales page for those products. So why have the images of them there?

Those three mistakes are fairly obvious ones. Yet they get made time and time again. Each of the emails I've used as examples comes from a very experienced marketer.

Sometimes we get lulled into these mistakes. We see emails from big corporates and assume ours should have the same fancy images in them. But we're not big corporates. People don't hire us because we're cool like Apple or we have great offers like Amazon. they hire us because they trust us and they believe we can do a great job for them.

Emails formatted to look like they come from business colleagues and friends.

When MarketingExperiments.com ran a test a couple of years ago. They discovered that:

By the way, don't assume that because people tell you they prefer images in email that it's a good idea to use them.

In Hubspot's Science of Email 2014 report they show that although two thirds of respondents in their survey said they preferred mostly image based emails, when they measured the impact of images they saw a consistent drop in click-through rates every time images were added to emails.

The more images, the fewer clicks.

So use simple emails with lots of white space that look easy to read.

If you use an image like a video thumbnail, make sure it displays on mobile devices.

And make sure your emails don't look like they're pitching something.