My Worst Sales Meeting EVER 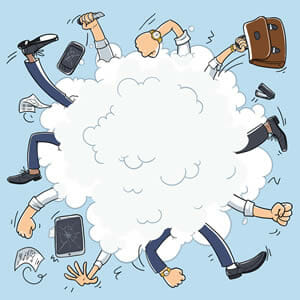 Back when I first started doing business development as part of my consulting role, I had an absolutely awful experience in a sales meeting.

So bad I still get a knot in my stomach thinking about it.

But I'm going to tell you about it in all its gory detail because I think there are some useful lessons to be learned from it for all of us.

I'd just finished running a project to improve the marketing capabilities of a manufacturing client based in Paris.

The project had been a huge success and we'd already seen over 10% improvements in sales in every country where we'd implemented the new strategies for them. A really big deal as they were in an ultra competitive market.

I'd closed the deal on the initial project, then run it and sold a couple of extensions over an 18 month period. Somewhere over $5m in total.

The idea was that I'd speak to the head of marketing of a similar business based in the UK to explain to them what we'd done and sell them an equivalent project.

This was my first time opening up a client relationship like this from scratch and it was a big opportunity for me personally to make a name for myself as a “rainmaker”. I really wanted to make this work and saw this as a critical first step to my next promotion.

We got the meeting set up through our telemarketing team – and we knew from our research that this client was struggling and needed the sort of improvements we were capable of delivering for them.

I was pretty nervous before the meeting, but the guy was friendly and pretty soon I was into the flow – explaining the case study and going through all the fantastic benefits and bottom line improvements my client had seen from our work together.

I came to the end of my case study and waited for him to start asking questions.

I waited some more.

“Let me tell you about some of the other things we did”, I said, and launched into some more examples from the project.

I had absolutely no idea what to do next. The guy was like a stone wall. He showed no emotions. No interest.

“Is there anything you'd like to discuss?” I asked.

And that was about it. I can't remember exactly how we closed out the meeting – it's a bit of a blur. But I was so embarrassed and uncomfortable I just wanted to get out of there.

Not surprisingly, nothing came of the meeting, and it didn't result in me instantly becoming a legendary rainmaker.

Now you can probably spot a number of very basic errors I made. As a starter I spent far too much time talking, and not enough time asking questions and listening.

And when he didn't respond – when he stonewalled me – I was far too passive. After all, he agreed to give up an hour of his time to meet with me – there must have been something on his mind that he thought he could get out of the meeting.

But what I think was at the core of my problems in that meeting was my attitude.

I was far too needy, too desperate to make the sale.

So when there was silence, I felt pressured to fill it.

When the potential client wasn't cooperating, I didn't call his bluff. I didn't want to upset him. I played along instead.

As a result, we didn't have a peer-to-peer conversation. It was vendor-to-potential customer.

Me trying to please him.

And that's just not the right tone when you're trying to establish a trusted advisor relationship. The potential client can feel you're trying too hard. That you're desperate to make the sale. And it doesn't feel right to them – they don't feel they can trust someone who's trying to sell them.

Why did I fall into that subservient role?

I put myself under too much pressure to make the sale.

In my case, it was because I wanted to make rapid career progress. I was “on a roll” and I was desperate to make the next leap up. But it backfired.

Today I see the same problem with solo professionals and small businesses who put themselves under far too much pressure in their sales meetings. In their case, the problem is that they need almost every meeting they have to result in a sale. Their pipeline is weak and they have very few sales meetings lined up – so almost every one of them needs to convert.

It's why very often when clients ask me how to improve their conversion rate of meetings to sales, my answer is often nothing to do with the sales meetings themselves. It's to improve their marketing so they're getting many more meetings with people who are more likely to become clients and so they’re less desperate to sell in each one.

Could this apply to you?

Have a look at your numbers. If you find you need to convert a very high percentage (50%+) of your leads to sales in order to hit your targets then the chances are you don't have enough leads and you're putting yourself under too much pressure.

Rather than trying to polish your sales techniques and get an ultra-high conversion rate, take a look at how you can generate more high-quality leads.