Why We Need More Experts, Not Fewer 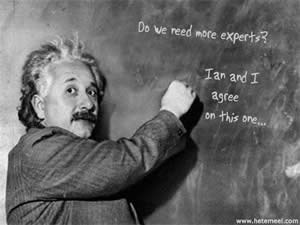 It's an overused term for sure.

Over on Danny Brown's blog, Ryan Hanley recently railed against The Commoditization of Expertise.

His argument was twofold. Partly that so many people now call themselves a “guru”, “expert” or “thought leader” that the term's become meaningless.

And partly that most of these folks were just regurgitating what others have already said. They weren't creating new insights themselves.

Well, I'd certainly agree with the first sentiment. If you have to call yourself a guru, or “the king of so-and-so” or “the queen of wotsit” you probably aren't. And you're being embarassing. Stop it.

But I'm going to disagree with the second point.

There's a great need for people who are “local experts”. Only Rosser Reeves invented the USP – but the world needs plenty of experts in it to help businesses create one (if they do it right, of course – most don't).

There was only one Peter Drucker – but millons of organisations needed help in management by objectives, customer focus, decentralisation and all the other stuff he pioneered.

There's only one Michael Porter, but…well, you get the picture.

Ironically, Ryan illustrated his point by saying “..in his book Outliers, Malcom Gladwell theorizes that it takes a person 10,000 hours of practice to master a task”.

Of course, the 10,000 hour principle doesn't come from Gladwell. It comes from Professor Anders Ericsson via Geoff Colvin and a bunch of others. Thus perfectly illustrating the point: Gladwell's not an ideas guy. He's a populariser. He's a type of expert in his own right – he finds out the new and interesting stuff that scientists and other “deep experts” are coming up with and makes it accessible to a broad public.

And similarly, a small business in Norwich doesn't need (and can't afford) Seth Godin to come over to show them how to make their business remarkable. But they can hire a local guy who's expert enough in Godin's ideas (and others) to put them into practice.

Now the local expert isn't going to earn quite as much as Seth Godin. But the world needs him too. And he'll be much better rewarded than the local guy who's not so expert.

So whether they're completely original or they're popularisers, or their local implementors – the world needs plenty of experts.