Making it easy for customers to say "yes". How to make cross-selling work. 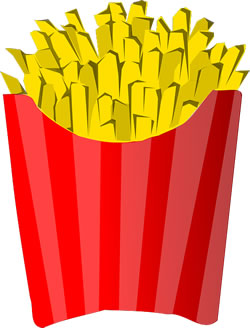 Some say those are the six most profitable words in business. And cross-selling can indeed ramp up the profitability of your sales.

Yet at the same time, clumsy cross-selling attempts can turn-off customers in no-time and leave a sour taste that damages customer retention.

In my experience, the first secret behind an effective cross or up-sell is that cross-selling works when it's actually helpful to the customer. When it makes the customer aware of valuable or useful options they didn't know they had (or in the case of “would you like fries” – when they had forgotten or overlooked the option).  When the salesperson or server is genuinely thinking about what might be useful to the customer – then the cross-sell will be seen more positively.

As I posted in In Praise of Passion, everyone's BS detector is set to max nowadays – and a mechanistic, pre-programmed, corporately mandated script will be seen through in an instant.

So why does “would you like fries with that?” work? It's the same pre-programmed script in every outlet. Well, in this case, there's no pretense about the cross-sell. There's no fake sincerity in the simple six words. Just a reminder that you've got the option of fries.

And it takes advantage of the second secret of the effective cross-sell (in fact it's one of the secrets of all sales): they've made it easy to say yes. There's no complex choice to work through, no expensive options to evaluate. Just a yes or no to something you knew you wanted anyway.

In Malcom Gladwell's Blink: The Power of Thinking Without Thinking

he highlights an experiment where researchers wanted to examine the impact of breadth of choice on decision-making.

Contrary to economic theory, in the real world too much choice paralysed their decision-making. In particular, because the effort involved in making the choice was far greater than justified by the payoff (a better jam is hardly a life-changing decision).

The same applies when cross-or up-selling – particularly for a small, simple sale. Make it simple for the customer to say yes and don't over-complicate with too many choices.

Case in point: I regularly stop by for a coffee in my local Caffe Nero (a kind of UK Starbucks with more of an Italian flavour). Historically, whenever I've bought a coffee they've always asked “would you like a cake or muffin with that?”.  And I've always said no. Too much choice. I've never had enough energy to think through what exactly I might want. But recently, they've started tailoring the cross-sell – and making it more specific.

Last time in I was asked if I'd like a Raspberry and Vanilla Chocolate muffin – the time before that it was some Passion-cake. It was far easier for me to say yes to that proposition. Nothing too deep to consider and weigh up. Just would I like one or not (and I have to admit, I succumbed to the passion-cake). And by tailoring each offer they're showing some genuine (albeit small) concern for me rather than just trotting out the corporate script.

Disclosure: I've included an amazon affiliate link for Gladwell's book Blink. Hell, someone might as well make some money if you really want to buy it. In reality, I didn't think it was that great. Some interesting examples – but no real clarity on when the instant “blink” assessment was accurate and when more reflective thought worked better. I found both Freakonomics

and The Undercover Economist

both more interesting and useful. (Hey – did you see the way I sneaked a couple more affiliate links in there – much more of this and be able to sell my own “how to make money blogging” programme to an unsuspecting world.

View Comments (2) ...
Previous: The Perils of Drifting Away from your Core Sales Positioning
Next: “Find Your Style” to Transform Your Business Development Success
Navigation
Tweet
Share
Share