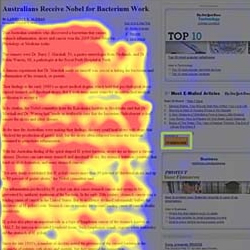 In 1998 researchers Jan Benway and David Lane coined the phrase “banner blindness” for the newly observed phenomenon that web users tended to ignore the colourful, animated banner adverts that had previously been thought to be more likely to be seen.

Over a relatively short period of time, web users had discovered that ad banners tended not to contain information of much value to them – and learned to ignore them and focus their attention on text areas and hyperlinks which were much more likely to contain useful content.

Hence “banner blindness” – web users have essentially trained themselves to ignore banner ads (or perhaps it could be argued that a proliferation of useless banner ads have done the training).

And the same thing happens, albeit more slowly, in the arena of real world sales.

When I first started selling consulting it was fairly easy to arrange meetings with executives. The prospect of a meeting with consultants who might bring interesting and useful ideas to their business was intriguing and unusual enough in its own right to secure a meeting.

Of course, over time, executives' time got tighter, and they discovered that not all consultants brought useful and interesting ideas.

Many claimed to be trying to understand the executive's challenges and needs – but just turned up and tried to shill their products instead. So soon, executives got their gatekeepers to turn down the meeting requests.

Next, we found that by quoting the types of improvement or savings we could make for their business, executives would be more willing to see us. Until, of course, they discovered that almost anyone could call and claim to be able to make 17% cost savings, 26% revenue increases or a 34.875% ROI – without any real knowledge or capability to do so other than in the simplest of situations.

So again, executives got their gatekeepers to turn down the meeting requests.

Today, the most reliable way of securing a meeting is to offer value in the meeting itself – to go through a relevant pre-developed report, white paper, or case studies for example. It's more difficult to claim to be able to do that if you haven't invested the time and brainpower to develop the necessary material.

Hopefully it will be some time before this approach and its value gets diluted (by outsourcing the development of low-quality reports to interns for example).

But the message is clear. In marketing you need to be continually upgrading your approaches – adding more and more value to your client interactions – from initial meetings right up to and after the sale.

If you don't, real world banner blindness will ensure you won't even be noticed.