I‘m sure you've noticed that becoming seen as an authority or “go to expert” has become rather fashionable as a marketing strategy. It seems that no matter what new tactic, tool or technique is being promoted, one of the main selling points is always that it will help you become seen as an authority in your field.

Every guru and marketing trainer seems to want to teach you how to become seen as an authority.

Maybe you're a little bit skeptical?

I don't blame you.

The truth is that hundreds of thousands of people write books, yet only a tiny fraction of them are seen as authorities.

Millions of hours are spent on guest blog posts, podcasts and live video and again, very few people who do it are known as authorities.

And “being everywhere” on social media? Even if you had the time, there are countless thousands of other people doing it too – and again, very few of them ever get close to authority status.

The Truth About Authority

I'm lucky enough that today, within my own little field, many people regard me as an authority.

It means that I get people coming to me wanting to work with me and I don't need to “sell them” (or at least I don't need to work as hard as I would if I didn't have that authority status).

But 10 years ago when I set up my business that was far from the case.

When I first set out I arrogantly assumed that because I *knew* I was an expert, clients would beat down my door wanting to work with me.

Of course, they didn't.

I found myself increasingly frustrated as I went to networking events and found that other consultants who I thought weren't as experienced or skilled as I was left the room with new clients and I didn't.

For a while, I tried to copy them. I thought that if I could develop their level of networking skills and salesmanship I'd win the business too.

But that was a mistake. I'm not a natural salesperson or a polished networker. In fact, I don't particularly enjoy either activity.

I learnt that instead, I needed to compete on my own terms. I needed to find ways of being seen as an authority so I didn't have to be great at networking or schmoozing or all those things I just don't like doing.

Of course, I made a ton of mistakes and went up many blind alleys along the way. So here, with the benefit of a lot of hindsight, are the top 5 things I wish I'd known about becoming seen as an authority when I first set up my business.

Hopefully, you'll find them useful and you can avoid the same pitfalls as I fell into :)

Celebrity is NOT Authority

It's easy to fall into the trap of thinking that being seen as an authority means you need to follow the same publicity-seeking path as the many mini-Kardashians you see so often on social media.

Not that the Kardashians are doing badly. It's just that they have different “skills” to you and me.

The celebrity model is based on spending 80% of your time on self-promotion and making your money from activities that don't really involve much of your own time: endorsements, branded products, work done by others.

For those of us who don't enjoy self-promotion and who need to spend time working with clients and mastering our craft, it's not the ideal model to go down.

You've got to wonder when those people who are constantly active on social media actually spend time working with their clients? The answer is they don't. They either don't really have many, or other people are doing that for them.

Authority is not about getting maximum visibility. It's not about having a clever name or strapline for your business (please, for heaven's sake, don't waste a day in a workshop worrying about clever names, logos and your brand identity. At least not when you're starting up and have real work to do).

Now if you’re anything like me when I first read this quote you probably have no idea who Anton Corbijn is.

And that’s kind of the point. Most of us haven’t heard of him. But back in the day, if you were a big name indie band like Nirvana or Depeche Mode or Joy Division or the Red Hot Chilli Peppers then you absolutely knew who Anton Corbijn was. And he was the guy you wanted to make your music videos if you could afford him.

Authority is NOT About the Tactics

Marketing teachers seem to have an obsession with tactics (and I'm guilty of that too). I think there's a natural human tendency to attribute the cause of a success or failure to the thing you did just prior to that success or failure.

So if we send an email and we get new clients, we assume it was the email that did it. We forget about all the relationship building we did beforehand. In a way, it's a bit like watching Brad Pitt ask someone out and assuming the reason they said yes was because of the chat-up line rather than the fact that it was Brad Pitt who asked.

My guess is that if you or I tried the same dating tactics as Brad Pitt, they wouldn't quite work so well for us. It's not the tactics that get Brad the date.

Lots of authorities have written books. But does writing a book make you an authority? Not really.

The last time I looked on Amazon there were 60,091 books on business strategy. 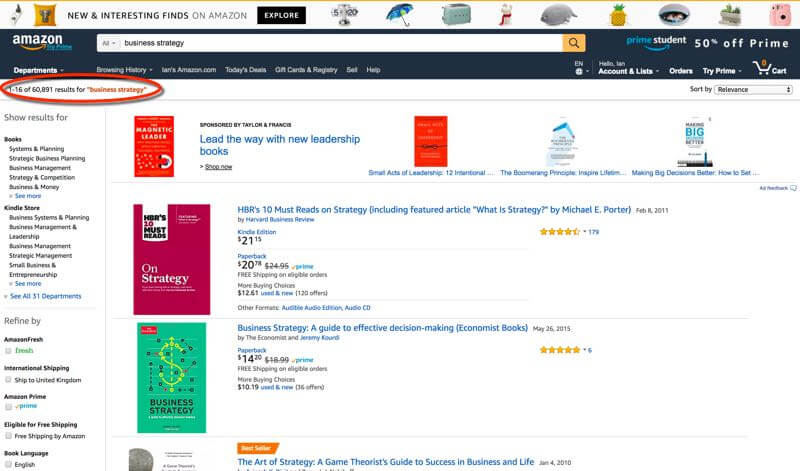 How many of those authors are seen as authorities on strategy? One percent? Half a percent? Maybe fewer.

We think of Michael Porter as an authority on business strategy not because he's written a bunch of books on the topic, but because the ideas contained within those books were revolutionary (at least at the time).

Those same models and frameworks are still being used by executives and consultants to help them create their strategies over 35 years after they were created.

Tactics don't make you an authority. Your experience, expertise, ideas and insights do.

Building Authority is NOT a One-Off Event

Let's be honest, we've all wished that we could do one amazing thing with our marketing and suddenly everyone would see us as an authority and want to work with us.

It doesn't work like that, of course. But that doesn't stop us hoping that this time we'll hit it out of the park and be set for life. At least that's what I hope for every time anyway :)

But what I've learned works much better is to build authority over time. To establish a platform for regular communication with your audience.

Love at first sight does happen. But far more common is that relationships grow over time. It's the same with authority.

When I opened up my Authority Breakthrough program this week for new members I got a message from someone who had been quietly getting my emails for three years. Their message: “just tell me how to pay”.

It wasn't the launch, my recent videos or any big event that made them want to buy. It was the three years of adding value and establishing myself as an authority through regular communications.

Not long ago the people we looked up to were always distant from us. The closest fans got to their favourite pop stars or movie icons was screaming from behind barriers when their planes landed at airports. And management gurus made a big deal of how unapproachable they were and the hoops you had to jump through to speak to them.

Today we expect to be closer to the people we look up to. We “follow” stars on social media and get to see behind the scenes to their real lives.

And when it comes to authorities, we want them to be relatable. We want to know that their expertise and experience is relevant to our world.

These days we're more likely to follow someone who's a couple of years ahead of us in their journey than a couple of decades.

I sat down with sales expert Jill Konrath recently to ask her about her path to becoming an authority. Jill is super-smart and super-successful, but what I found hugely interesting is that she took a deliberate decision early on to be very transparent about her own problems and challenges when it came to sales.

She decided that her purpose wasn't to be seen as knowing all the answers, nor was it to give the highest level techniques to people who were already good at sales. It was to help the typical man or woman on the street struggling with sales and especially to give them confidence that they could do this.

So she made sure that all her material was written for those people and that instead of her showing off her expertise, she opened up and showed her failings and fragility so that they would gain confidence that they too could succeed. In many ways, she was ensuring she built very deep empathy with her audience – knowing who that audience was (and it wasn’t the top performing sales reps in big companies), where they were psychologically, and what would help them the most.

People in small businesses who needed to sell fell in love with Jill and saw her as their authority because she was like them, but a few steps ahead.

Authority is a Way of Life, NOT Just a Way of Getting What You Want

What I mean by that is that I've seen very many people get interested in becoming seen as an authority because they realise it's a great way to attract more high paying clients.

But they see it as a tactic. Just something they do to get clients.

Authority is much, much more than that. It comes with responsibility.

If the thought of doing those things doesn't fill you with excitement, then being an authority isn't for you.

Being an authority takes lots of work. You have to stay at the top of your game. You have to keep learning, keep trying new things, keep sharing.

If you don't enjoy doing those things for themselves, then you won't stick at them enough to really play your role as an authority. And your audience will see through you.

You've got to want to be an authority, not just want what authority brings you.

Is it worth it?

Absolutely. If it's right for you.

And if it is, there's no better start than my 5 Day Authority Challenge.

In just 5 days you'll discover what it *really* takes to become an authority in your field – and build your roadmap for getting there.

You can sign up for the challenge by clicking the button below.