Is it better to be Truthful, or Interesting? 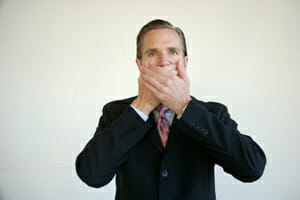 I've just had a rather heated argument with someone on a Linkedin discussion group that's had the side benefit for me of clarifying what I feel is the “right” way for professionals to promote their businesses.

The person in question posts regular articles on a Linkedin group I'm a member of. His posts are pretty much “best practice” from a copywriting perspective. The headlines are always controversial and intriguing – they always make you want to read the article. And the articles are well written, opinionated and again, controversial.

Essentially, he's differentiating himself through his writing. He's not bland – he has clear points of view that I'm sure attract a lot of readers.

Last week, however, he posted on a subject I know something about. The business value of Twitter.

This is where it became intriguing for me. His headline was effective – it got people to read the article. The article was well written and got across a clear point of view.

The trouble was, I know a lot about using Twitter to get new clients. Both from my own experience and from others who I've talked to in depth about how they've used twitter to win new business. And my experience was very different.

His position massively oversimplified reality. In my experience, Twitter can work well for some people, in some circumstances, and used in certain ways. It's not a simple black or white, good or bad situation. Just like any other business development or lead generation channel, it requires careful thought to figure out if it will work in your circumstances, and to figure out how best to use it.

I wasn't the first person to answer the post – someone else posted a really thoughtful reply full of examples of how twitter could bring value. I posted my experience. I explained that I had 50,000 followers so I had some experience in the matter – and I went on to describe both how I had won (at least) a couple of clients via twitter and how others had done so with rather fewer followers but using a strategy of building deep relationships with a small number of people.

A few days later I received a Linkedin direct message from the person saying he was going to make a second post effectively using me as an example of how twitter was a waste of time because I had only won two clients despite having 50,000 followers.

I replied saying that that would be misinterpreting the facts. I use twitter for 10-15 minutes per day – and not every day. Getting two clients (and probably more, as I can't track all the clients who initially found me via twitter) and a bunch of other side benefits for 10-15 minutes per day in my spare time when there's not much else I can do for business development is actually a pretty good ROI in my point of view. Especially since I'm really, really expensive so those clients are very high value.

I also explained that whether twitter would be a valuable investment for people was not a simple question and required thorough analysis, not a blanket answer. And that I typically advised clients not to try to build large followings, but to use twitter to help build deeper relationships with a small number of potential clients.

Today I noticed he had gone ahead and made a new post on the Linkedin group exactly as he'd said. He'd completely ignored all the information and explanation I'd sent him.

Instead he made up a spurious calculation of how many people I must have touched with tweets over a year and claimed that only getting two clients from that “captive audience” viewing my tweets was an awful ROI.

Now measuring success with twitter in terms of new clients per tweet is like measuring success in advertising in terms of new customers per reader of the publication you've advertised in. Never mind that the one customer you got spent $1m and the advertising was free. Apparently it must have been a bad ROI because number of new customers per reader was low!

What he did was in many ways good copywriting. He continued to have compelling headlines and interesting, controversial and well-written material in his post.

But it was bad, bad advice. Worse, he deliberately gave that bad advice despite knowing better.

I can forgive him the initial post. We all sometimes write on a subject we're not experts on but which we feel passionate about. And sometimes we're wrong.

But I gave him detailed information which he then ignored when writing the second post.

It may attract more viewers. It may build your reputation. it may make you more popular with people who share similar viewpoints.

People reading it will make bad decisions as a result that will cost them significant time and money – or worse.

And that brings me to my point.

As someone who writes a lot, I'll admit to trying to construct intriguing or controversial headlines to get more clicks to my site or readers to my articles. I've even constructed headlines to try to help my ranking in google.

But as professionals our primary duty is to our clients. We must give them the very best advice we can – not just say what best promotes ourselves.

Now sure, I may not be right all the time. And my passion may get the better of me and cause me to write or say something when I'm not in full possession of the facts.

But it is our absolute duty as professionals not to twist or ignore information to best serve our own interests.

So it's most definitely best to be truthful.

Interesting gets more readers and more traffic. But truthful is the right thing to do.

And it allows me to sleep at night.

And I like to think that in the long term, it wins loyalty and trust.