Why you should NEVER subscribe someone to your newsletter without asking 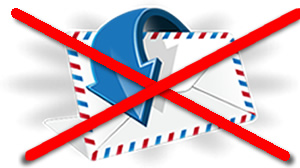 Let me tell you a cautionary tale.

A year or so ago I was contacted by a marketing consultant who'd found me via the web. We swapped emails. Bumped into each other at an event. And eventually he asked if I'd like to meet for a coffee as he had a few questions he'd like to ask my advice on.

We met up. I liked the guy – genuinely nice fellow with lots of experience. He asked me a bunch of questions about a new market he was trying to move into and I gave him some ideas to try.

In the meantime he signed up for my newsletter and joined a webinar I ran.

All good so far.

But then he signed me up for his newsletter without asking.

I assume he did it with all his contacts. Somehow believing that the more people that read his emails the better.

Frankly, they weren't very good. The headline story last month was about his new website. Followed by articles on a new column he was writing for a local newspaper and a new client he'd taken on.

Nothing of any interest to me or any potential clients or referrers who might be reading it. All about promoting him, nothing of value.

So eventually I gave up and unsubscribed. My inbox – like I'm sure yours is too – is full of useful stuff I don't have the time to read, let alone useless stuff.

Yesterday when I was looking through the list of people who'd unsubscribed from my emails recently (yes, it does happen) ready to zap them from the database, I noticed his name.

He'd unsubscribed from my emails within hours of me unsubscribing from his in a kind of “tit for tat” measure I guess, I checked back and before that he'd pretty much opened and read all of my emails. So I assume he found them useful.

So the net result: he now doesn't get emails from me that he was presumably finding useful. And he's annoyed me. He's lost my goodwill and any chance of me helping him out again.

And all because he subscribed me to his newsletter without asking me.

Because I didn't want the emails, or find them useful, and because they added to the clog in my inbox I just got more and more cross with him.

And when I finally unsubscribed, that obviously upset him.

It's not that he's a bad guy or some kind of spammer. As I say, he was a genuinely nice guy. Just misguided when it comes to email marketing.

So if you're thinking of blanket adding your contacts to your newsletter, or if you take all those business cards you get at every networking event and automatically plug them in to your system – think twice.

Ask first. You'll get fewer subscribers. But the ones you get will be appreciative. They'll be loyal. They won't build up simmering resentment because you're clogging their inbox with something they didn't ask for.