The Best Way To Market To Corporate Clients 15th February 2020

As the author of one of the best-selling books on Email Marketing in history (Email Persuasion), I often get asked, “which system do you recommend for email marketing?”.

I used to have a really complicated answer depending on the circumstances of the person asking where I'd suggest Aweber, Mailchimp or Getresponse first, then an upgrade to Infusionsoft or Ontraport when they get more advanced.

Just as background, it's worth knowing that I've been an active user of Aweber, Infusionsoft, Mailchimp, Ontraport and GetResponse for years in the past and know the systems well. I've also tested out iContact and Constant Contact. So this is a pretty informed recommendation.

So why do I recommend ActiveCampaign over other systems?

Well firstly, it's powerful. It's got all the advanced tagging, sequences, tracking and segmentation features of Infusionsoft and Ontraport at a fraction of the price. In fact, the automation is in some ways better with ActiveCampaign because it's got built in Zapier integration which allows you to hook it up to literally hundreds of other tools from CRM systems to bookkeeping systems to survey tools, helpdesks and e-commerce.

And since they're not spending all their development time on those extra features like landing page builder, shopping carts, affiliate systems, etc. then they can focus on making the best email marketing and automation system there is.

Secondly, it's simple. One of the big problems with systems like Infusionsoft is that frankly they're badly designed from a usability perspective. Many people who buy Infusionsoft find they hardly use any of the advanced features because they just can't figure out how. Or they have to hire someone to run it for them.

Of course, it's not trivial to use ActiveCampaign. But it's a lot easier than the other advanced systems.

Thirdly, they have great live technical support. One of the frustrating things I found with both Infusionsoft and Ontraport was that if I found a problem with the system (and believe me, I found many) or I had a question about how to do something then it was very difficult to get a sensible answer out of their first-line support.

In my last year with Ontraport, I became increasingly frustrated at the to-and-fro I got whenever I found a problem. Usually, their first line support either misunderstand what I meant me or wrongly claimed it wasn't a problem so I had to repeatedly raise the same issue. With ActiveCampaign they have technical experts manning their live chat who've been able to address almost every question I've had straight away.

Fourthly it's great value. Infusionsoft and Ontraport typically cost around $299 per month (with a $1,999 startup fee in the case of Infusionsoft) and they restrict the number of emails you can send per month before paying “overage” fees: 25,000 for Infusionsoft, 100,000 for Ontraport. Those numbers sound big, but if you have 5,000 contacts then it's only 5 emails per month on Infusionsoft: far fewer than you need to send for effective email marketing.

The pricing means it's scalable too. If you're just starting out with email marketing it doesn't make sense to go for Infusionsoft or Ontraport as they're too big for your needs, will just confuse you, and cost quite a bit per month. With ActiveCampaign you can start small but use the same system as you get bigger without having to transition to a new one when you begin to need more advanced features.

And although they won't thank me for saying this, I believe that most people just need the Lite plan rather their more expensive Small Business or Enterprise plans. It gives you all the marketing automation you need.

Of course, it's not perfect. It doesn't have the built-in e-commerce/shopping cart features of Infusionsoft or Ontraport. For me that's not an issue as I do all my e-commerce via Thrivecart which has built-in integration with ActiveCampaign at a deep level – so I can trigger ActiveCampaign tags and automations based on what people buy or cancel or anything they do on the cart. It's also integrated with e-commerce systems like Woocommerce, Shopify, Etsy and Magento.

So overall, my recommendation to pretty much everyone looking to start with email marketing or transition to a system with more advanced automation is to try out ActiveCampaign.

It’s the system I use daily to run my business.

You can get a 14-day free trial through my affiliate link here:

PS Although this is an ActiveCampaign Review, I should also give an honourable mention to Convertkit here.

Convertkit is fairly new but is similar to Active Campaign in that it does advanced email automation without the additional shopping cart and other features of the more expensive systems.

It hasn’t got all the advanced features of ActiveCampaign, and it's not as well integrated with external systems. But I've heard from some people that they find it easier to use than ActiveCampaign.

If you find you don't get on with ActiveCampaign usability-wise, it's worth giving Convertkit a look.

Active Campaign: in my view the #1 Email Marketing System for Small Business and Solo Professionals 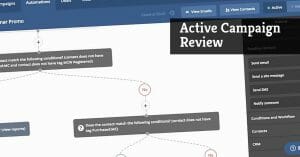 ActiveCampaign is my #1 recommendation for anyone wanting a simple to use email marketing system that also comes with the advanced power of tags, segmentation, automations, goals and a host of other features.